In my quick 5 minute summation detailing my recent blogging sabbatical (detailed here and here) I mentioned the effects a lower back injury has had on my running goals for the year, pushing almost all hopes of distance races out of the picture for the first half of this year.  I have discovered in the process that swimming puts less stress on the injured back area, hence my big first half of the year goals all focus on swimming.

The primary goal I set for myself involved completing two new distance open water swimming races, first a 2.4 mile open water race followed a month later with a 5k or 3.2 mile open water swim race.  The first of those two distance goals would involve swimming down the Tennessee River in the 11th Annual Chattanooga Rat Race Saturday June 11th.
This race has a short 2.4 mile swim and a longer 4.2 mile swim option, with mostly triathletes completing the 2.4 mile distance race because the course mirrors the Iron Man Chattanooga swim course (except it’s on the opposite side of the river).  On race morning the 4.2 had 100 swimmers and the 2.4 had 102 swimmers.  This race has grown in popularity as open water swimming and marathon swimming (any open water swim distance of a 10k or greater) has grown in the area.  This same club hosts the super popular Swim the Suck 10 mile open water swim event every year.
In my few years of doing Olympic and Sprint distance triathlons the furthest I ever swam continuously was a mile.  I have been training to go further, with most of my pool swims topping out around 3500 yards per session.  June is still early and the local water temperatures were still too cold to jump into open water.  This resulted in the Rat Race being my first open water swim of the year. I was not worried as I felt I had a good deal of previous open water experience, fresh water and ocean.

My watch recorded data and the course map.  Recorded with my Suunto Ambit 2.

On race morning the weather was perfect and I dropped the car and wife off at Coolidge park, the finish of the race. The weather was cool and crisp, a perfect temperature to start a 2.4 mile swimming race. The race organizers had arranged for bus transport to the start, a private dock.  Because there was just over a hundred of us we were escorted to the dock in waves of 20 or so.  I allowed myself to get swept up early and found myself floating in the river constantly wasting energy to keep myself in line with the dock, the official starting line.  Eventually all of us made it into the water and got ourselves sorted out in relation to the start line.

There had been little rain throughout the week so we were informed there would be little in way of current from the dam being let out. In luck years they let water out just as we are starting and the current is strong enough to give an extra push.  There was a very slight push on race morning but nothing major.  During the first Iron Man Chattanooga a few years ago, they let the damn out just at the start of the race and most swimmers were finishing the 2.4 mile swim right at an hour.
As the race started I worked on trying to get my stroke and breathing calmed down. In the pool I easily breath bilaterally,. but in this case I could not get myself calmed down enough and just stuck to breathing to one side for a bit and then switching up to the other for a little while.  My sighting was rusty and it took a little time to get into the rhythm of open water swimming.
Before the start of the race we were told to keep the green buoys to our left and the shore to our right, as the river would still be in use.  The biggest problem involved finding these green buoys, I looked but could not find them. Instead I just found landmarks to sight off ( the Tennessee River has awesome and very distinct landmarks that made this very easy).  This often lead me further into the middle of the river and the kayakers kindly intervened to get me back on course with a polite bop on the head with their paddle.  After a mile I finally sighted the buoys they were talking about and made a dash to get myself on course.  At this point I went under the power lines and I knew from the race directions I had completed a mile and only had 1.4 miles remaining.

At this point I began to calm down and get into my stroke.  I now was appropriately back on course and was once again surrounded by swimmers.  A few times other swimmers ran into my path as they swung outwards and sideways, I just had to work my way around them and keep moving.  After a while I caught up to a lady with pink arm sleeves on. She was swimming pretty steady and her sighting was fairly spot on.  Because of the colored arm sleeves I just spotted off of her and enjoyed the view of the banks along the river.

Before I knew it I came to the first of three bridges(the Veterans bridge) that indicated I was nearing the finish.  The last bit of this swim course involved swimming under three bridges.  Just after the third bridge there was a boat ramp we would walk up and across the finish line.  This was the first time I ever swam under bridges and it truly was a thrilling and amazing experience.  The water underneath the bridge got a little choppy, but at this point I was nearly done. 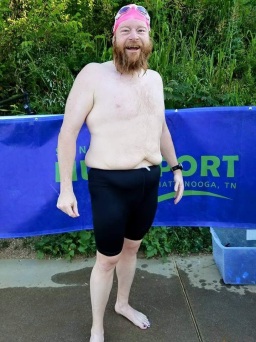 As I went under the third bridge I saw the finish line and could hear my wife calling my name.  I saw the orange buoys and made a dash to get to shore and to the finish line.  In the end I had finished in 1:15:37, 4th in my division (only 15 seconds out of 3rd) and 61 out of 102 swimmers (only 81 finished).  With this being my first open water swim of the year (I only swam one time in open water last year also) and my first time swimming this distance I am very pleased with my placing and my finish.  Of course this was just a warm up for the 5k open water swim on July 10th, but I should be able to work on sighting, breathing and rhythm in the water before then. Overall a great race, perfect weather and a great swim.
…Til next time.

Ultrarunner and lover of travel and technology, as well as all things geek and fitness.

Second 10 mile run since my surgery in January. Ou

Few pictures from my 9 mile run up and around Joh

Two weeks ago, I had my first 10 mile mountain run